For any questions, purchase orders or question about products,
Please do not hesitate to contact us by clicking below.

OpenBlocks® IoT VX2 is a gateway product with the high functionality and reliability required for the actual operation of the IoT system. This product is the latest model of OpenBlocks® Family for IoT purposes. OpenBlocks® has so far exceeded 100,000 units in cumulative shipments, and has been widely adopted for social infrastructures, and has earned the high reputation and trust by the customers including telecommunications carriers. 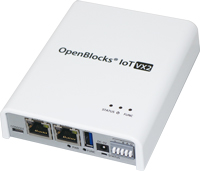 OpenBlocks® IoT VX2 is equipped with Plat'Home’s powerful IoT Gateway Software called "FW3.1", which can respond flexibly to the need of intelligent IoT together with Microsoft Azure. The need is expected to expand significantly in various countries around the world.

Tomoyasu Suzuki, President of Plat’Home Co.,Ltd, quoted, “Plat'Home is pleased to announce the OpenBlocks® IoT VX 2 which realizes edge computing. The number of devices connected to the Internet is increasing day by day, I am sure OpenBlocks IoT VX 2 together with Microsoft Azure IoT Edge, realize true intelligent cloud/ intelligent edge, will be products that will support future IoT market. Plat’Home will continue to actively offer new products and services to contribute to the development of the IoT market. Lastly, we are also planning to add Windows 10 IoT Enterprise preinstalled model, once evaluation is completed after GA of Azure IoT Edge.”

Takeshi Shobuya, Senior Officer, Director, IoT Device Experience Sales, Microsoft Japan quoted “Microsoft is delighted to the launch of Plat'Home's Intelligent Edge IoT Gateway "OpenBlocks® IoT VX2" to the global market. With the launch of "OpenBlocks® IoT VX2" supporting Azure IoT Edge to the global market, will now be able to provide intelligent cloud capabilities of Microsoft Azure to execute on the edge device which we are sure to accelerate utilization of IoT in various scenarios. Microsoft will continue to deepen collaboration with Plat’Home, and will support customers' business transformation through the revitalization of the IoT market through intelligent cloud and intelligent edges around the world.”

FW3.1 is equipped with Plat'Home Data Handling Module System (PDHMS) which is a message handling system supporting flexible and high-speed communication between the device and the cloud. PDHMS is a system designed to realize inter-process communication flexibly and at high speed between application modules inside the IoT Gateway. It enables implementation of application modules of various functions on the edge side, realizing flexible and high performance IoT edge computing. PDHMS supports multi-devices and multi-clouds, and is capable of responding flexibly to a variety of the customer’s IoT system need.

FW3.1 supports the Docker Container as a standard. It can build and operate a scalable and seamless IoT system throughout the operational environment by supporting Docker, which can develop, release and execute cross-platform applications regardless of edge or cloud.

FW3.1 supports Azure IoT Edge which is an intelligent edge offering of Microsoft Azure. Azure IoT Edge manages and deploys applications from the cloud to run them locally on the FW3.1.
By using Azure IoT Edge, the customer can use various intelligent services such as Azure Machine Learning (AML), Azure Artificial Intelligence (AI), Azure Stream Analytics (ASA), Azure Functions etc. which are provided by Microsoft Azure. You can also write your own cod using C, Java, Node.js, Python and .NET.
Also, Azure IoT Edge can be also preinstalled to meet requirements from customers under appropriate license from Microsoft.

OpenBlocks® IoT VX2 realizes the security functions and the attack immunity in both software and hardware so that it can withstand the deployment and security operation in the actual environment. By default, Secure Boot is supported, and the hardware is also equipped with TPM 2.0 as a hardware security module (HSM). This realizes secure operation that can cope with the situation where the gate is deployed massively in the actual environment.

To support long-term operation of this product, Plat’Home will provide annual subscription services. The customers who subscribe to the service can receive our support for the product over the long term, together with the notice at the time of version upgrade. In the future, additional supplementary services such as SaaS type service for integrated remote management of the IoT gateway will be added.

Wide array of communication interface for IoT that support variety of devices, sensors and networks

Equipped with a wide range of device communication interfaces to allow communication between IoT devices such as sensors and IoT gateway.

Compact, light-weight and robust and design for IoT

The system architecture is designed to enable flexible and high-speed inter-process communication of application modules inside an IoT Gateway. Application modules with various functions can be installed on the edge side, thereby ensuring flexible edge computing.

A group of applications to acquire data from sensors and other IoT devices using BLE or UART (serial communication, etc.). They support a wide variety of IoT devices by default, while also supporting extensions of IoT device control applications for Lua language* by users.

An application to distribute inter-process communication between the above-mentioned application modules to multiple modules.

The web-based Management UI is equipped to carry out the searching of sensors and beacons along with their pairings, connection setups with cloud services from different service providers, and also the operation and setting of IoT communication functions from the web browser screen. When IoT goes live, knowledge of command lines is not required, which alleviates the engineering burden.

It supports Docker as an application execution environment. Docker containers can be used on OpenBlocks® IoT VX2 and controlled from the Management UI. In addition, it supports the function to deploy Docker images released on the Docker image sharing service Docker Hub, and to deploy from a self-constructed private Docker image registry, thereby enabling users to take advantage of a wide variety of Docker images. The Management UI can also deploy Docker containers, in addition to carrying out start, stop and resource allocations.

Node-RED is a programming tool that involves wiring together hardware devices, APIs and online services. From WEB UI, it can process data received from sensors and visually program it to be sent to a cloud service or take an action, allowing easy realization of edge computing for IoT. It can also employ additional functions for Node-RED that are provided by software and cloud service vendors, making the addition of various applications a relatively easy task.

Technical support for the product in installation, operation and maintenance will be available by the optional servie.(*1)

Notification for the software / system update information to a registered e-mail address.(*2)

Plat'Home is a major developer and manufacturer of micro-servers. Ever since its foundation in 1993, the company has supplied computers made in house to communication and network fields as a pioneer of Linux servers. The palm-top-size ultra-small Linux server, OpenBlocks®, has been adopted by a wide range of domains to support Japanese social infrastructure, including not only major communication operators but also logistics, transportation, finance, the energy industry and public agencies. It has also been attracting attention in numerous fields that are anticipated to drastically grow in the near future, such as M2M and IoT (Internet of Things).

Inquiries regarding this announcement

Inquiries from the user